Article posted in the National Post on September 9, 2015 (Paola Loriggio, The Canadian Press)

The number of Google Alerts I have received in the past week for the key word “Citizenship and Immigration Canada“, have been staggering. Guess what the most common topic was? You guessed it. Canada’s role in the sponsorship of Syrian refugees.

Let’s face it, the refugee issue has officially dominated the public debate and become one of the most polarizing issues in this Federal election. Many have been asking whether Canada should be doing more to take in greater numbers of Syrian refugees. This is definitely a fair question.

However, I wonder whether we would be having this discussion at all if it were not for the heart wrenching image of the drowned little Syrian toddler whose body washed up on a Turkish beach. His family  was trying to reach the Greek island of Kos from Turkey with several other refugees when their rowboat capsized. As a father of four children, it is not hard to envision how I would be feeling if that was my little one washed up on shore.

[NOTE: I have resisted providing a link to the image as it still makes me want to cry just thinking about it. If you want to see it, just Google it! It is not hard to find.]

Today I received an Alert to this news article published in the National Post. Click here to read the entire article.

I chose this one to share not because of the content of the article, but because of the relatively heated exchange that took place between a few of the readers who voiced their contrary opinions on the merits of Mr. Al Rahim’s claim to refugee status in Canada. For your reference, I have set out the most interesting parts below: 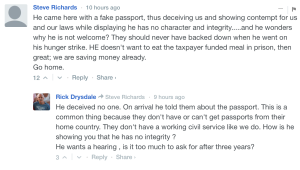 It is pretty clear where Mr. Richards and Mr. Drysdale stand on this issue. However, their exchange turned a little nasty when another reader (pro-Mr. Al Rahim) chimed in with his thoughts. 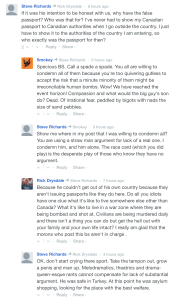 This interchange typifies the polarity that exists amongst us Canadians as we wrestle with the refugee question. I don’t know about you. However, some of my closest friends could easily slide into the shoes of either Mr. Richards or Mr. Drysdale.  This debate could go on for hours without either convincing the other that they are anything but a “moron” hiding behind “drama-queen-esque rants” void of substance. In fact, the dialogue continued for some time after with others joining in the fray. I gave up after about 30 posts; however, you are welcome to continue on where my stamina faded.

Regardless of who may ultimately be right, one thing is certain, that precious little toddler did not die in vain. His death has stirred an incredible wave of discussion over the Syrian refugee crisis that would have likely never occurred, to the extent it has, but for his death. It is my hope that our future government (whoever that may be) will keep this refugee dialogue in the public conscience long after the images of the lifeless little toddler have faded. It will only be through open sincere discussion that a compromise can be reached between charity and indifference.