If you are an international student, temporary foreign worker, immigration lawyer, consultant, HR manager, global mobility specialist, Canadian employer or just plain old Canadian citizen or permanent resident with a curiosity in Immigration … you’ll be regretting the day you didn’t listen to this Podcast. 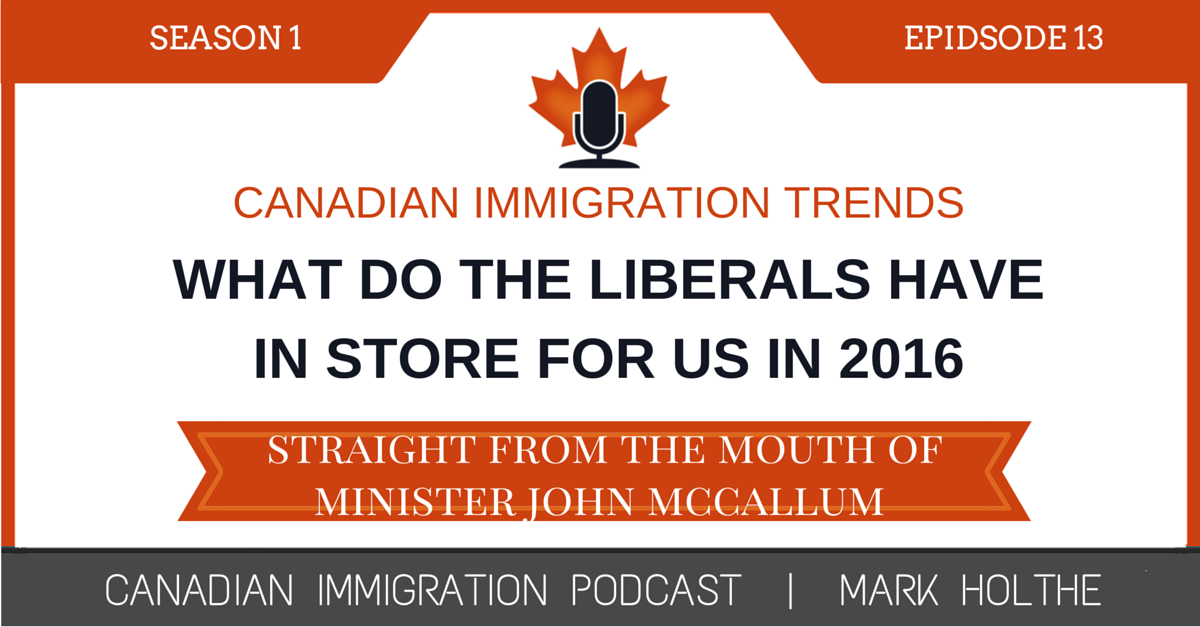 Because I can not resist my Top 10 lists……here is another one for you!

My Top 10 Canadian Immigration trends for 2016 – straight from the mouth of our Immigration Minister, The Honourable John McCallum:

1.   The Liberals actually care what us Canadian immigration lawyers think – who knew?

2.   Canadians like refugees after all and it will continue that way for the foreseeable future.

4.   The Family Feud is over….Family Class processing on its way down!

5.   The Minister hates the term “Economic Immigrant” – all immigrants contribute regardless of program.

6.  Express Entry is having “unintended consequences” that must be addressed.

7.   Complete overhaul to the Live-in Caregiver program on its way!

9.   What does the future hold for PNPs? Status quo according to Minister McCallum

10.  International Students – the calvary is on its way!

There has been considerable coverage of the Liberal government’s sweeping changes to immigration culture in Canada.

As quickly as the Conservative government changed many of the countries old immigration laws and programs, the Liberals have been just as fast to announce their intention to reverse them.

So the big question is……

….where exactly are the Liberals headed?

In Episode 12 of the Canadian Immigration Podcast, I shared some brief highlights from a speech given by the Minister of IRCC, John McCallum to the Canadian Bar Association’s National Immigration Section members who attended our Annual Conference in Vancouver April 7-9, 2016. I also promised that more would be coming…. so here it is!

As you can tell, I really like the whole Top 10 Concept. Hopefully this list will actually have 10 highlights as opposed to Episode 12 of the Canadian Immigration Podcast where I somehow skipped a number and ended up with only 9 on my Top 10 list.

At any rate, if you have anything to do with Canadian immigration, whether as a lawyer, consultant, HR manager, Global Mobility Specialist, foreign national, or even Canadian employer, you are not going to want to miss this Top 10 List.

I want to start off this Podcast with one caveat. I am a 100% true and blue card carrying Conservative Party member. I hold these values dear and intend to continue my active involvement with the party long into the future. However, with this being said, and despite my best efforts to find fault, there was very little I could complain about with the vision Mr. McCallum has for immigration in Canada.

1. The Liberals are actually willing to listen to Immigration Lawyers and their clients in shaping the immigration landscape of Canada into the future.

MM Knows that CBA has worked on this day and night – he has read our reports on TFWP and EE – Minister impressed with CBAs contribution – didn’t disagree with anything.

Stark contrast to the previous regime. Basically considered their relations with the CBA to be adversarial.

2. Update on the Refugee situation in Canada and future intentions

Succeeded in bringing 25,000 refugees to Canada by end of February 2016

They went from a situation were the main concerns of Canadians was security especially at the time of the Paris attacks and these concerns evolved to a huge welcome provided by Canada across the country to these refugees.

Minister McCallum felt he was the “only immigration minister in the whole world whose main challenge was to provide enough Syrian refugees to satisfy the overwhelming generosity of people who want sponsor them.

Have committed to bringing in another 10, 000 which they will expedite as quickly as possible

The liberal levels planning calls for a 300,000 target – which is an absolute maximum – one more refugee means one less of something else

The Liberals have already quadrupled the number of refugees and have reached the limit.

MM signed documents restoring the age of dependants to 22. However, it will take a 1 ½ years to go through the regulatory process.

Goodness knows why going from 19 to 22 should take a year and a half. Too bad I couldn’t use ministerial instruction on that.

Minister is generally opposed to Ministerial Instructions, but some times they do come in handy.

“Just as he is very proud as a CDN for refugees coming in, ashamed that the heavy hand of the CDN state keeps spouses apart for 2 years. This is unacceptable. This is not something that can be fixed like flicking a switch with Bill C6. On this one it takes longer.”

– the max is currently at 300,000 – want to increase this to accommodate the possibility of more immigrants and more spouses to get these processing times.

We will do this by: 1) more money and 2) more importantly need to do things more efficiently. Need to learn from experience in Lebanon and Jordon with the Refugees – where they processed applications fast, but equally well, super fast, but concurrently, ABC together, not A then B then C.

Must transfer over the experience with refugees to family class applications – do it just as well, but much more efficiently. – we did it for refugees, so of course we can do it for other – he told his department to “get to work”. This is what the department is doing – we will have positive news on spouses in coming weeks. – which could means months as usual.

In 2016 many family members work – parents and grandparents enable the father and mother to work even when they do not work.

In election campaign the liberals were neither critical nor praising of EE because it was so brand new. Now in process of seeking ways to reform express entry and MM values CBA input….

Had a meeting with Ontario Business People at an Ontario Chamber of Commerce and they ranked the different streams for PR status in Canada as:

Express Entry should be the favored process for businesses wanting immigrants, then PNP, then TFW.

Challenge for MM is to make EE more flexible, more fluid, more desirable for businesses wanting to bring immigrants to Canada. Make it the first choice and not the third choice of businesses.

“we should encourage them to come here and not slap them in the face by taking away their 50% credit for time in Canada, so I want to make it easier and give more points to facilitate their entry to Canada as PRs, that is pretty well for sure, other things are less for sure…

… looking at possibly less points for people getting LMIA approved Job Offer because right now  it is totally dominant and has certain unintended consequences. Possibly limit ore eliminate the use of the LMIA under Express Entry…. NOT committed to doing this, but certainly committed to looking at doing it very seriously. It is something they will look into very seriously.

MM thinks it is a great program both for young people and aging people – processing times will be coming down automatically in the next months. One major thing is that they will honor their campaign promise make significant changes to how the program works. They intend to a have a system of regulated companies who hire caregivers on behalf of families needing them and deploy them to households that need them.

Changes will help Families because they will be spared the hassle of the LMIA AND– will benefit the caregiver because if household is a problem, the company can transfer caregiver from household A to B. thus protecting the interestswill help both sides, the family and caregivers by doing this.

8. How is IRCC dealing with the challenges of two departments (including CBSA) administering immigration?

– Separation of immigration into CIC and CBSA in the past

Question = has any consideration been given to bringing CBSA and IRCC back together?

He can’t speak for CBSA, but knows there has been a culture of enforcement throughout CBSA that public servants are awarded for catching as many bad people as possible. Understand there is a quota for how many refugees they expose – there is definitely scope for improvement within CBSA – Ralph Goodale, Minister of Public Safety is working on these issues.

9. What does the future hold for Provincial Nominee Programs?

When asked whether Liberals are considering increasing allocation of nominations to the provinces? MM is of two minds on this issue. He is willing to do whatever is best for the country, but being a federal person, it is not to have the federal roll disappear altogether. 50% of economic immigrants come through the PNPs. If that is best for Canada…fine.

10. What is in store for International Students?

some people say MM has a habit of moving too fast, but some times it is important to do it fast – there is some urgency in this matter (international students)– thinking of doing the following in stages:

Stage 1 – give more points to students under Express Entry

Stage 2- do other things to improve EE

but hoping for him to do the student thing as quickly as he can – you would agree that Ministerial Instructions for these purposes are for a good cause.